Work on National Cement’s new five-stage preheater-precalciner continues, rising some 400 feet over the existing Ragland plant. The equipment being installed represents today's best available technology and when operational, will efficiently heat the raw mix, significantly reducing the fuel required to produce clinker. This multistage process allows the use of up to 100% alternative fuels, consistent with VICAT Group's global plan to increase its alternative fuels substitution rate, reduce its carbon impact and save resources.

While last year was dedicated to laying the groundwork for the expansion project, April 2021 marks 14 months of construction with multiple major projects underway throughout the busy jobsite. Expert crews from numerous local businesses are assembling the new kiln line right next to the current production line which continues to service National’s customers all across the southeast.

“We did an extensive amount of deep foundation work and drilled more than 200 caissons all over the job site before we could build foundations for the pre-heater, the kiln and the cooler. Immediately after that, we started the mat foundation for the blending silo and pre-heater tower.”

The mat foundation is a large, continuous rectangular concrete slab which sits on natural bed rock and is designed to carry the entire load of the blending silo and the preheater’s steel superstructure.

Construction project manager Hervé Lapillonne says the main stack will soar to roughly 400 feet and will be a milestone when completed. “We'll see completion of this big tower on site and the erection of the two stacks of the project, the cooler and the main stack. The main stack is going to be 134 meters in the sky. So, this will be the major realization for '21,” he says.

Concrete for the footers, mat foundations and piers was supplied by National’s ready mix subsidiary Kirkpatrick Concrete. “We really want to get everything right from a delivery standpoint and a quality standpoint when we go through the gates up there,” says Kirkpatrick’s Rick Passey. “It’s a very active jobsite up there. It's large equipment, it's large trucks, it's tanker traffic, and all the construction traffic on top of that. As the space got smaller for us to work in, we had to be more aware and more safety conscious.” 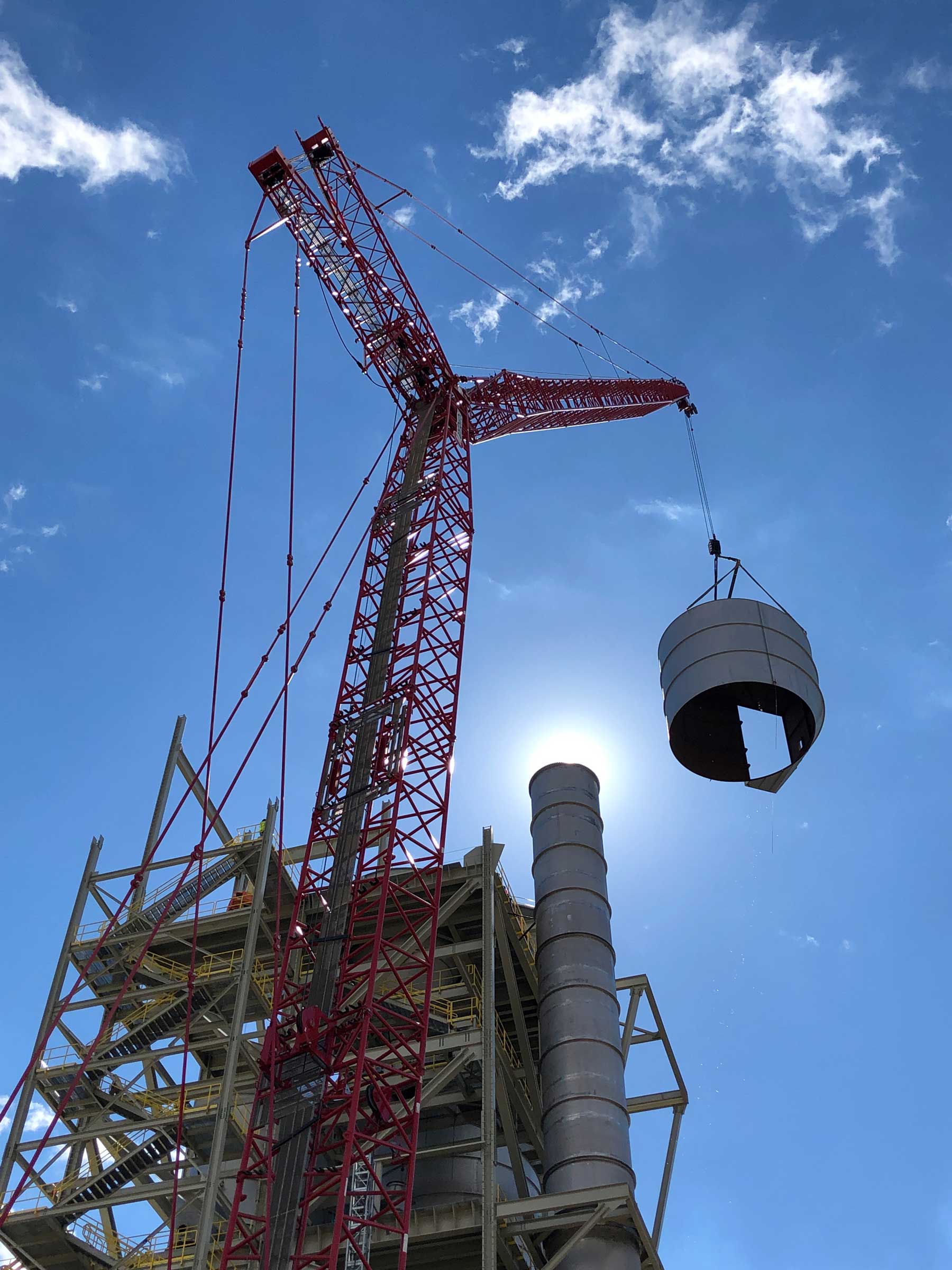 Completion of all the site work marked a major step in the construction process and now clears the way for the delivery and assembly of more oversized equipment that will make up the new production line. “We are receiving a lot of equipment every day. The storage areas we have set aside for this project are starting to fill up pretty quickly now.” Says Brocheton.

For months crews have been welding oversized sections of the cyclones, a key component of the preheater, together on the jobsite. They are being hoisted into position and will have a refractory material installed to insulate the surrounding steel tower from the high-temperatures required to cure the material.

The raw mix will move through five cyclones (diameters around 29 ft) which produce a vortex of hot gases to raise the temperature of the material and drive off up to 90% of carbon dioxide and moisture contained in the raw mix before it enters the kiln. Other compounds such as alkalis, sulfates, and chlorides are separated from the stream by centrifugal force.

“We expect these compounds to get out of the system with the clinker being produced as we don’t have an alkalis by-pass, so no waste to recycle or landfill,” says Brocheton. “However, the steel by itself cannot stand the heat that we are going to need to cure the material and to produce the clean kiln that we are talking about. So inside of the cyclones that are being put together, we will need some refractory material to protect the steel.”

As the preheater tower is assembled, crews are getting ready to work on the next major component, installation of the new kiln. While much of the major equipment was produced in the United States, some of the more specialized gear, such as the kiln shell and drive gear, was crafted by engineers in Europe.

“Those are very, very critical components,” says Brocheton. “The kiln shell is the main core of the equipment and it will be received in sections. Those sections will be welded together and installed on big support rollers atop three kiln piers. We also have a big gear fabricated in to install around the shell itself that drives the rotation of the kiln.”

Project managers anticipate an August 2021 completion date for the preheater and expect to commission a new clay storage area later that same month. Work is also underway on a new control room and central laboratory.

“You know it's real excitement,” says Lapillonne. “I cannot say anything else. We’ve spent months, years, weeks on this project in the design. We really went into lots of details before going into the construction, in term of design, in access, in emission control, in the design of equipment, in sizing the equipment. And to finally see something coming from the ground and to go from the 3D model that is very theoretical in a computer, and then see the same staircase in the same position that we spent weeks on actually on site, it's really a huge excitement.”

When operational in the first quarter of 2022, company leaders say the new production line at Ragland will have the capability to produce an additional 2-million tons of cement each year.